The Legend of Heroes: Tra...

Se mere til verdenen i ny...

NieR: Automate The End of...

EGM: Let's start off now with Revolution by getting to the online side of things. How that going to be different from what's already out there? Microsoft had it pretty well handled with Xbox Live.

Reggie: As we get into the Internet space, the first way we're going to get there, obviously, is with Nintendo DS, which is going to be having wireless-enabled games for this holiday season. So principles that we're applying for DS are the same principles we're going to apply for Revolution, which is, we want to make it easy and included for the consumer. We want our games to be, if you will, optimized for online play. We want it to be free, so that there are no cost barriers, but we want it to be an overall fun experience so that there's also no what I call experience barriers.

By doing all that, we believe we can drive up our participation rate of online play to be well in excess of about the 15 percent you see today. And the 15 percent comes from a number of industry sources, but if you think about it, 15 out of every 100 consumers who buy an online game actually go and play it online. That's pretty small. Versus what we want to see, for example, with Mario Kart, is we want to see 80, 90, 95, near 100 percent of folks who actually enjoy the experience so much, who have access to the experience, to go do it online.

EGM: So you would say for Revolution, that we should expect more of those key franchises you already have to kind of drive and launch Revolution?

Reggie: Absolutely. And as Mr. Iwata said, so we're working on our next true Mario platformer for Revolution; we're working on our next Metroid, and we showed snippets of that work. And I'm actually meeting with Michael Kelbaugh to spend some time with him to understand the vision for our next Metroid Prime game. You'll see Zelda. You'll see Smash Bros. And Mr. Iwata certainly wants that to be a wireless Internet-enabled game because we know it would be so much fun for the core gamer.

So absolutely, for Revolution you will see all of our franchises, plus, we've gone on record to say that we are aggressively working on a number of new franchises. And that is something that has been a criticism of the past, you know, "Folks, are you milking Mario and doing too many Mario-type games?" We are hard at work at new franchises and we believe that's going to be critical to the launch of Revolution.

EGM: And then third-party support. It definitely got better with GameCube than N64, but how are you going to keep that momentum with Revolution when we haven't really seen the controller but we know it's going to be...it's going to make our head explode? Say, a popular franchise like Splinter Cell, which kind of requires a conventional controller. How are you going to make third parties support a system with such an innovative setup and controller?

Reggie: The thing that I always find surprising, and certainly in the last year I've had wonderful opportunities to spend quality time with a number of our key third-party publishers, is when you sit down and share the innovation with them, just how excited they get. I saw it firsthand with DS; we're seeing it now with Revolution. The fact that you and your fans haven't seen the controller doesn't mean that no one else has.

I mean, again, and Mr. Iwata did this during his presentation on Tuesday—if you just think about it, we're going to have the ability through wireless internet to download all of your great games from NES, SNES, N64. Think about it: Each of those controllers were different. How are you gonna play? That captured some the imagination of what our controller needs to be able to do, and certainly as you get into the meat of that type of innovation with the developers, their eyes truly light up because they start to imagine what's possible with that type of configuration, which is vastly different than a sheer horsepower type of game. 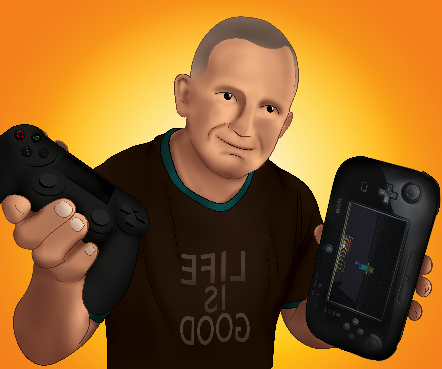