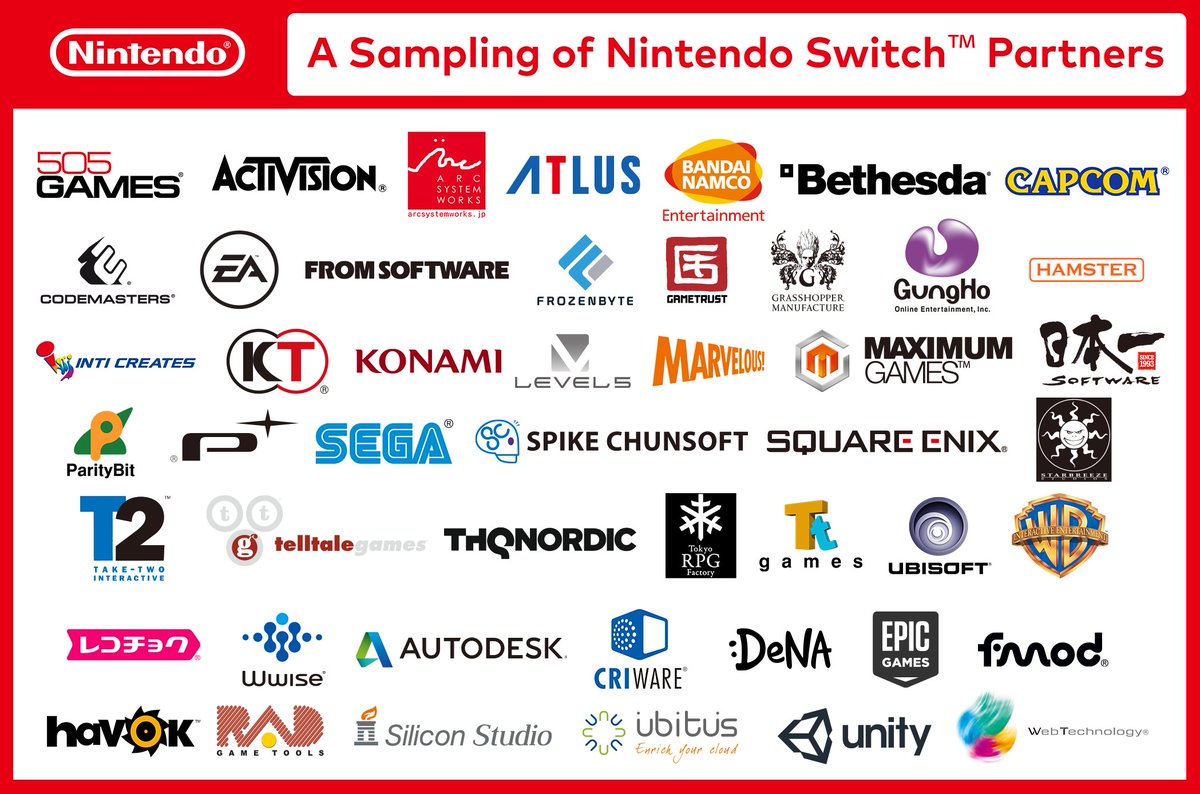 Thrilled to be a publishing partner for #NintendoSwitch! The platform presents exciting opportunities for our studios & fans.


With the Nintendo Switch’s unique capacities and design, Nintendo will again redefine the way we play games. The Switch is accessible at its core and also seizes on the growing trend of sharing more experiences and playing anywhere at anytime. Ubisoft and Nintendo enjoy a long-standing partnership and we are currently developing a number of games for the console, including Just Dance 2017. We look forward to sharing more at a later date.


Engine Software, veteran independent game developer, is following up Nintendo’s big announcement and teaser of its latest home console: the Nintendo SwitchTM. We are delighted to announce we will fully support Nintendo’s new hardware as we always have supported Nintendo’s platforms in the past, all the way back to the Super Nintendo.

One of Engine Software’s key strategies has always been helping indies, developers and publishers branch out to other platforms, whether that is through full design and development on a specific platform or adapting existing games to a specific platform.

The Nintendo SwitchTM is as of now fully included in this and our engine, tools and development pipeline for the new console are already set up. Our first game is already well underway but it is a bit too early to announce that quite yet.


“We’re happy to have had the opportunity to collaborate with Nintendo on the video. While we are not confirming any specific titles at this time, we are pleased to announce our partnership with Nintendo and support of the Switch. We look forward to revealing specific games and details in the future.”


SEGA and Nintendo have been great partners over the years, and we continue to with our support of the Nintendo Switch. We look forward to revealing specific game plans soon, but have nothing further to announce at this time


Bandai Namco Entertainment has enjoyed a long partnership of publishing and developing great titles for Nintendo systems. We want to congratulate Nintendo on their exciting announcement. We look forward to bringing both iconic franchises and new titles to Nintendo Switch.”


At Yacht Club Games, we’re very excited for the Nintendo Switch! Nintendo continues to put fun first by focusing on delivering new, engaging ways to play, which is what we’re all about! We can’t wait to take advantage of the system’s capability to have local and online multiplayer anywhere. It will allow for some truly great game experiences. We can only imagine the pure joy we’ll have playing Nintendo’s games both on the go and at home.


Thomas Happ, the creator of Axiom Verge, had this to say about the Nintendo Switch:

I think it looks great, though I question why the marketing is focused exclusively on making big screen games portable and doesn’t depict 3DS-style games. One of the missteps of the Vita seemed to be assuming that everyone wanted a portable Uncharted when in fact the system is most treasured for smaller, quirky, or indie style games. So I hope in the future they show some of those kinds of games since they could possibly be their bread and butter.

I do wish the screen were 3D like 3DS, but that’s a minor gripe. Hopefully we can get a devkit soon and start porting Axiom Verge over.


We're excited for the Nintendo Switch and having met with Nintendo last week we're confident you'll see some our games on it next year!

Yes, we are #NintendoSwitch developer and we love it!


YES, we are developing for the #NintendoSwitch! We're super pumped, how 'bout you? https://t.co/W7AuuLEz1U pic.twitter.com/dJ1mS6jVM6

#NintendoSwitch is awesome! We can't wait to support it with our games. Two games planned in first half of 2017. pic.twitter.com/AInn0G1qIV