Since its inception, the Gunvolt series has become known amongst fans for its high-speed, stylish 2D action. This game will see series rival/anti-hero Copen take the lead and push the series’ speed and intensity to the next level, all the while keeping the game accessible to new fans. “Experience the apeX of 2D action” with Luminous Avenger iX!

Game Features
1. Abilities to support a wide variety of players!

“Prevasion”, which can completely nullify damage, and “Anthem”, which returns players from death in a powered-up state, are just some of the abilities which can help new players experience Luminous Avenger iX.

Experienced players can enjoy scoring “Kudos” by racking up combos while avoiding damage, a thrilling way to play to challenge the game’s stages.

2. Upgraded to take advantage of the newest hardware!

Your partner robot Lola transforms mid-mission! In this state, Lola brings her powerful songs directly into the game, pumping up the action!

The sound and graphical effects are the most dazzling in Inti Creates history!

3. An intricate score system made for sharing!

Scores are displayed after each mission on a result card.

Story and Setting
In the near future, in a nation unknown…

Humanity has entered a new age where the majority are now “Adepts” – people who possess supernatural powers known as “Septimas”.

Humans who do not have Septimas, known as “Minos”, are being hunted and executed by the “Institute for the Promotion of Human Evolution ‘Sumeragi’”.

Among these Minos, whose everyday lives have turned into a living nightmare, there was an urban legend spoken of only in hushed tones: tales of the “Luminous Avenger iX”.

It was a rumor of a warrior clad in pure white armor, accompanied by the Muse of Hope, Lola, who fought for the sake of all Minos –

This story begins when the Luminous Avenger iX, “Copen”, encounters a lone girl. 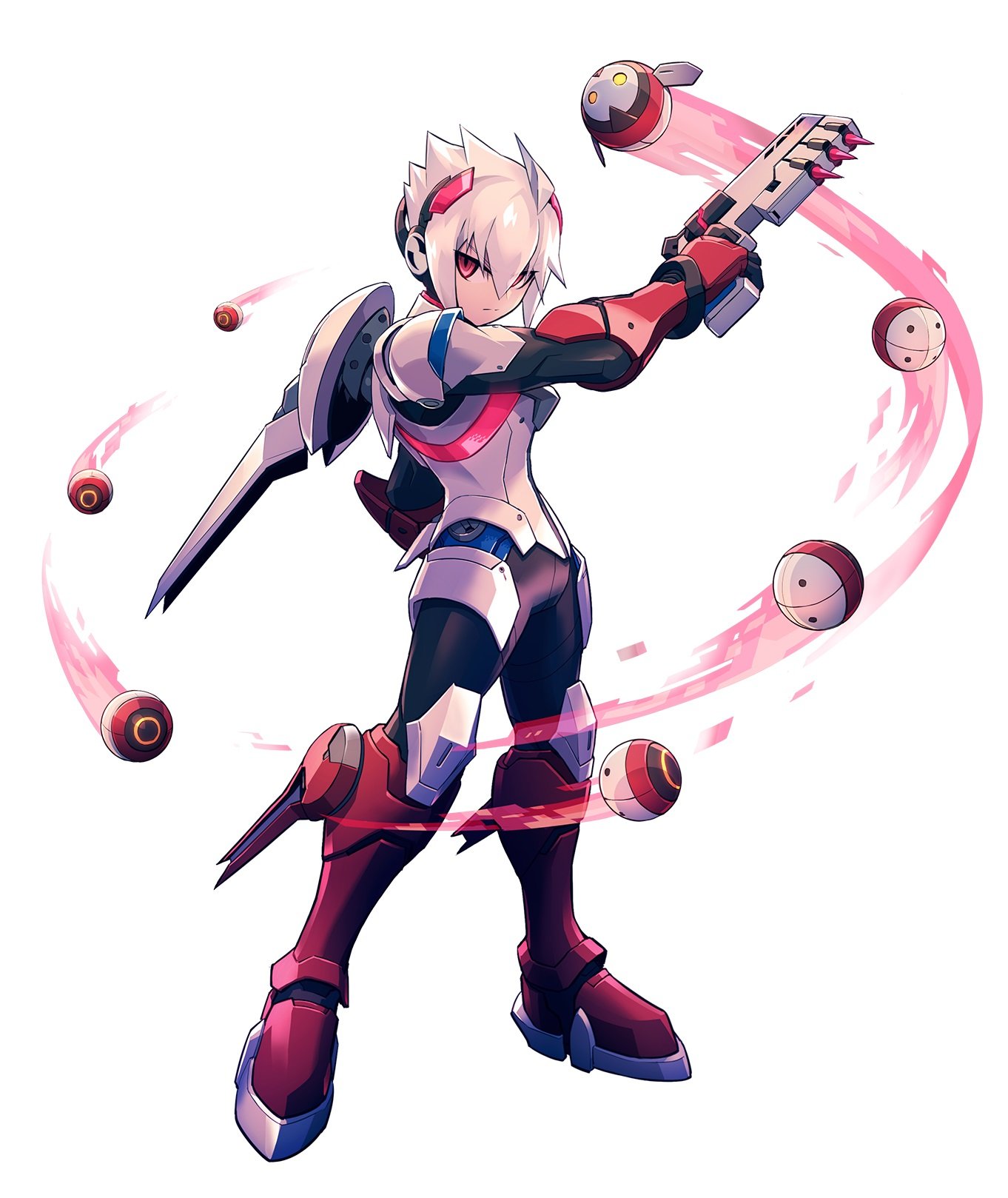 The young man known as the Luminous Avenger iX.

Due to his own reticence, his true identity is a mystery to most. Known to some as the “Savior of the Minors,” he journeys far and wide alongside his trusted partner, Lola, to rescue Minors wherever they may be. He seems to be searching for something known as the “Butterfly Effect”. 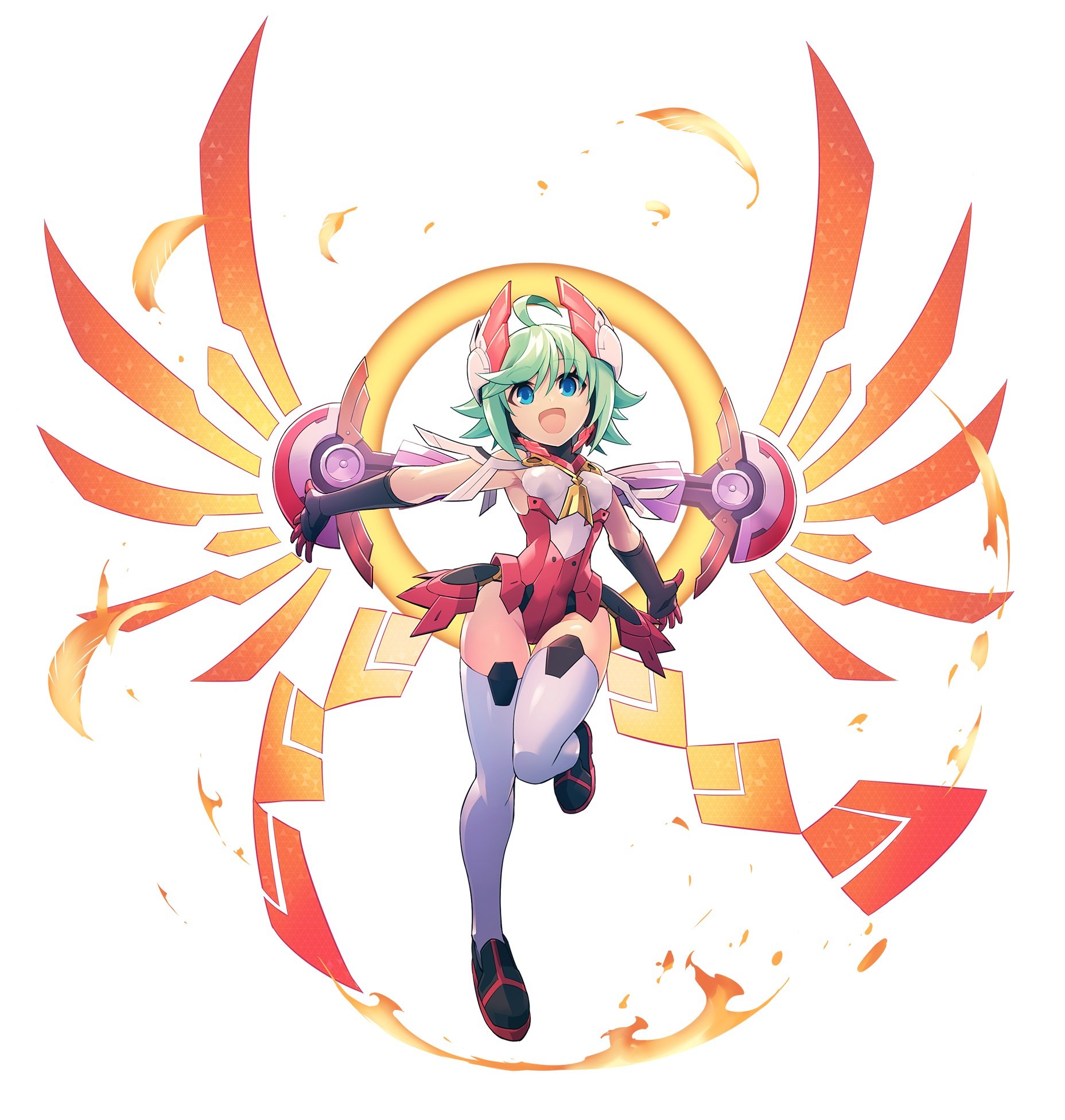 She is equipped with a scanning system capable of analyzing enemies’ Septimas. She can then replicate mock versions of those Septimas as “EX Weapons”, which Copen can use at his disposal.

She is Copen’s reliable partner. 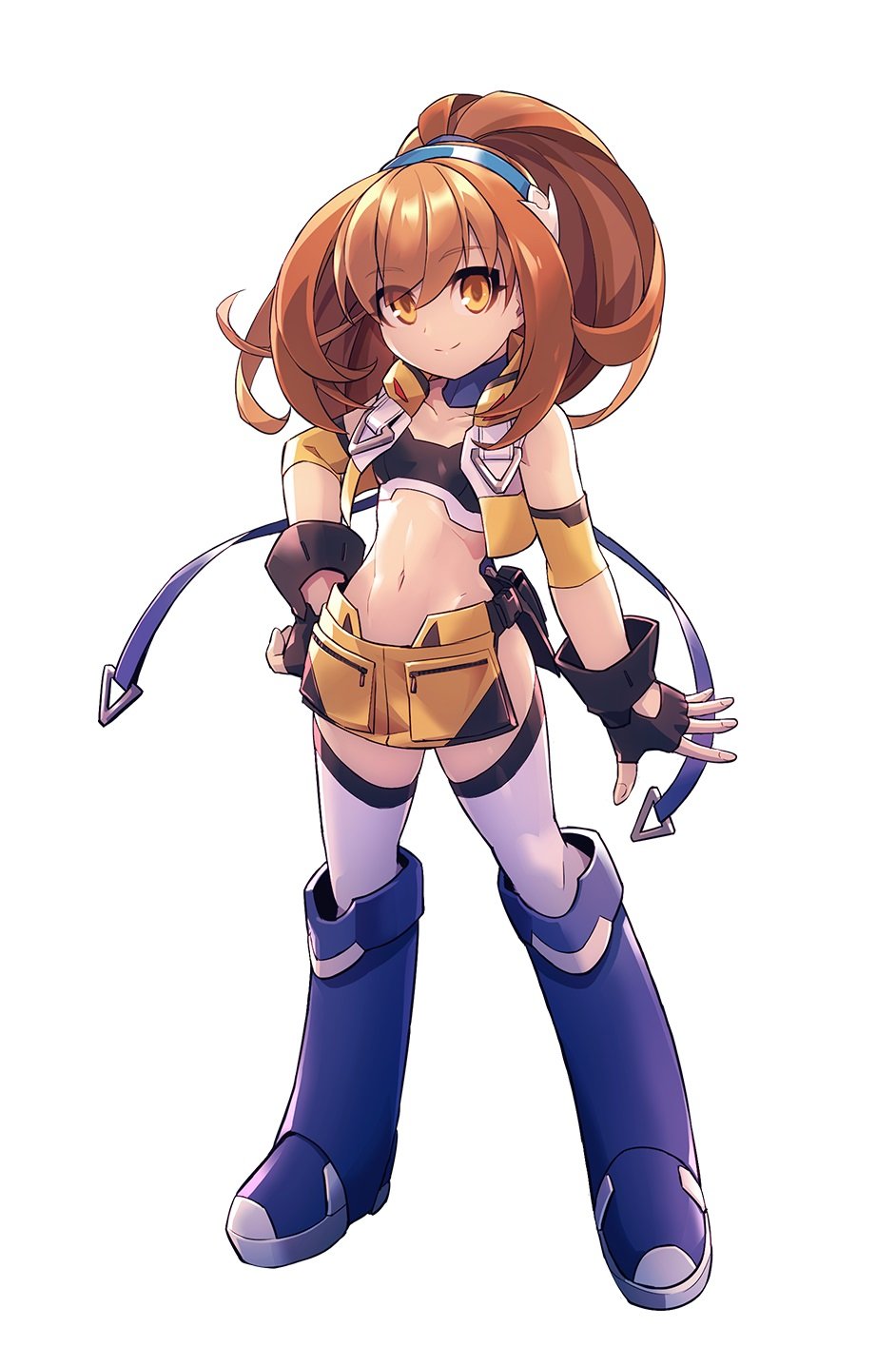 While normally taking on a spheroid shape, ever since Lola analyzed the “Muse” Septima, she is capable of transforming into “Idol Mode” to support Copen in battle with the power of song.

In this form, Lola also uploads music videos to the net to give hope to the Minos, among whom she is known as the “Muse of Hope”.

Sumeragi, “Promoters of Evolution”
An organization that aims to usher in a new age of humanity by eliminating all Minos.

While on paper, Sumeragi is merely a single corporation, their massive influence gives them control over essentially the entire nation. They hand-select from the nation’s strongest Adepts to become elite “Falcons” and serve Sumeragi’s interests. 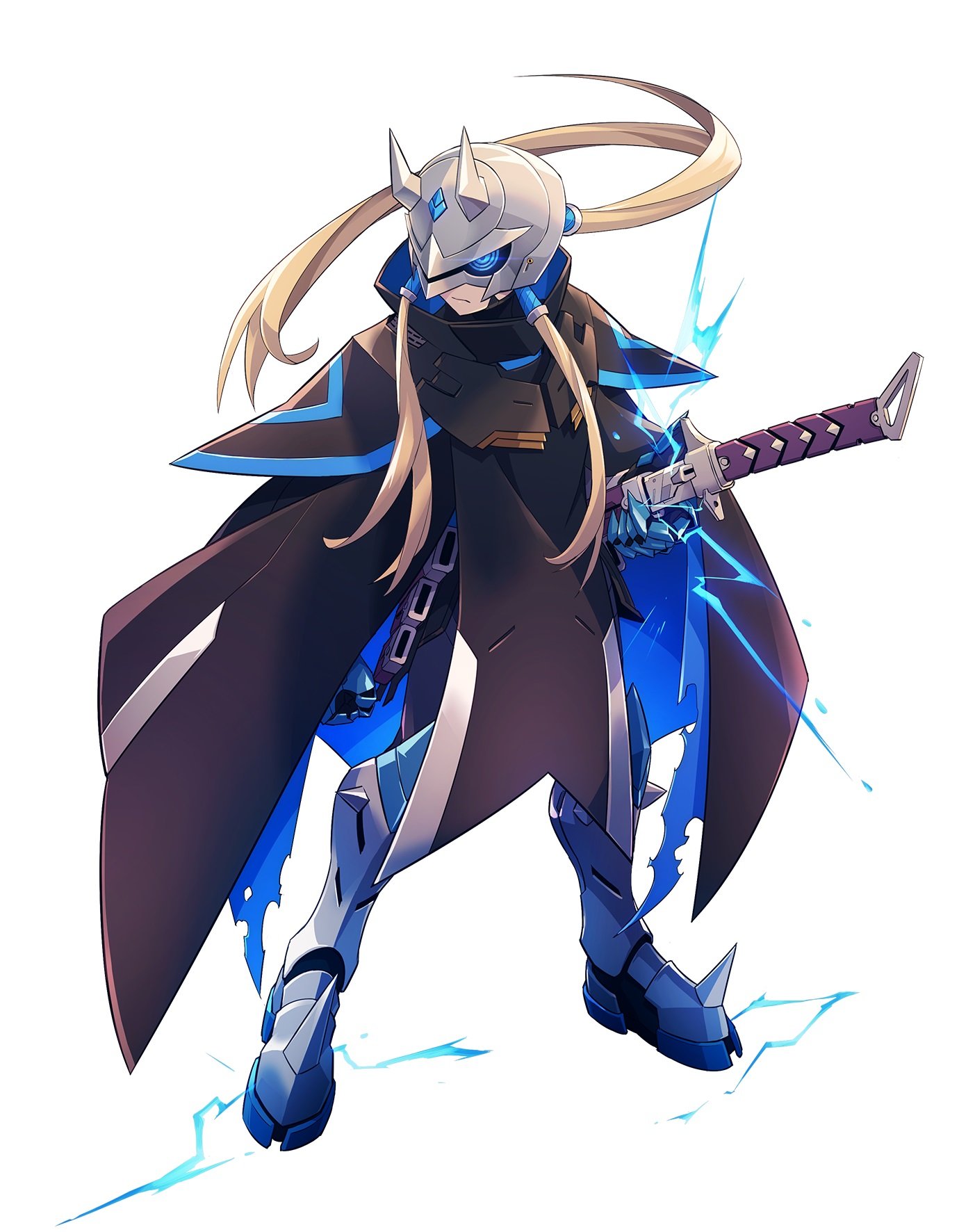 An Adept with an electric Septima who is affiliated with Sumeragi.

He is a ruthless warrior who exterminates Minos without question according to Sumeragi’s orders.

Blade is under the direct command of Sumeragi’s supervisory AI, putting him above even the most elite Falcons.

His combat prowess is said the be the pinnacle within Sumeragi.

Gameplay Introduction
Shot Attack
Copen’s basic attack is a photon laser gun.
It fires high-power, high-speed projectiles directly at targets.
It will fire continuously as long as the Fire button is held down.

Lock-on & Homing Photon Lasers
When Copen makes contact with a target during a dash, he will mark it.
This marking will curve his photon lasers directly into the target with perfect accuracy from anywhere on-screen.

Air Movement / ”Bullit Dash”
Copen can consume a segment of his “Bullit” gauge to perform a high-speed aerial dash.
The trajectory of the Bullit Dash can be changed up or down with the directional buttons. It can also bounce off walls.

Enemies can also be marked with the aerial Bullit Dash.

Hover
Copen can hover for a short time after a Bullit Dash.

Prevasion
Copen can automatically evade almost any attack at the cost of Bullit gauge.

Reload
Bullits refill automatically over time, but Copen can instantly reload at any time by quickly pressing the down button twice.

Lola is a high-spec robot that revolves around Copen. She will automatically emit a barrier to protect Copen from missile-type attacks.

After defeating an enemy adept, Lola can analyze their Septima with her Septima Scanning system and create a mock version in the form of an EX Weapon. Each EX Weapon is quite powerful, and enemies have differing weaknesses and strengths, so using every EX Weapon is key. Shortcuts can be assigned to the right stick for these weapons, making them easier than ever to use.

By destroying enemies one after another, Copen will accumulate “Kudos” points. Collecting over 1000 Kudos will activate Lola’s Idol Mode, transforming her into a human form.

The stage music will change to a vocal song from Lola, and Copen will gain access to powerful “Overdrive Abilities”.
Overdrive Abilities have powerful effects, such as automatically restoring health and an attack power bonuses based on current Kudos.

Whenever Copen’s HP reaches 0, there is a chance Lola’s “Anthem” ability will activate and restore him back to life.
When Anthem activates, Lola will undergo a powerful transformation into her Awakened Mode!

A special Anthem-only vocal track will play, Copen will gain access to his Overdrive Abilities, and he will have unlimited Bullits at his disposal.

Progress through a variety of obstacles throughout a stage to encounter the boss at the end. Defeat that boss to obtain a powerful new “EX Weapon”. Those are the basics of a mission!

Afterwards, you can spend credits earned on a mission to acquire new abilities and enhance Copen’s capabilities.

1. Make use of EX Weapons to clear the stage
2. Defeat the boss to acquire a new EX Weapon
3. Get credits and go to the next mission
4. Spend credits to obtain new abilities 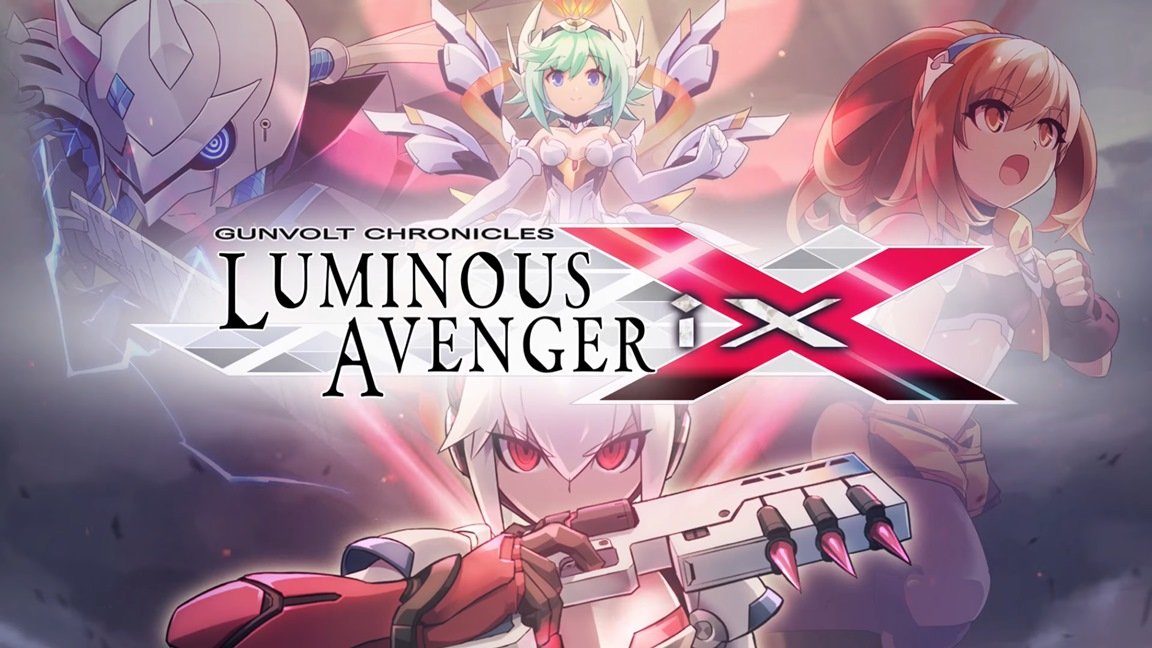